Two-player versions of existing games feel a lot like IP board games to me. Part of me gets irrationally excited about them, loving the original and assuming that the new one will obviously do its prequel justice. The other (infinitely pessimistic) part of me assumes that they are a lazy cash grab and will not do anything exciting with the IP they are working with. Thankfully, this pessimistic side of me has been proved wrong again. Osprey Games sent along a copy of Cryptid: Urban Legends for review, and I thought it would be a great chance to explore two-player editions with a more insightful eye.

We will be looking at three two-player editions of games here, if briefly:

Choosing what games to look at made me realize one thing about two-player versions that I didn’t really realize. That pessimist inside of me treating them like early 2000s IP board games is just wrong – I don’t want to spoil this review, but I think all the candidates I chose to look at are quite good, for reasons we are going to dig into. Digging into two-player versions of larger player count games, many of them are actually just lovely. Bohnanza: The Duel and Caverna: Cave vs Cave both work really well, and I think this entire genre is, by and large, better than playing their regular counterparts scaled down to two-player. What I really want to explore is the way these games adapt their mechanics and ideas down from a larger player count game to work well at two-player.

Cryptid: Urban Legends was a game that I was hyped up for but also so intrigued by. Cryptid is a 3-5 player deduction game where each player has one piece of information about the location of a cryptid (an animal/beast that may or may not exist – think the Loch Ness Monster or Bigfoot). The goal is to ask other players questions, getting valuable information from them, without giving them your valuable information. If you can analyze the information you have more effectively and locate the cryptid first, you win. Urban Legends changes up that formula drastically. 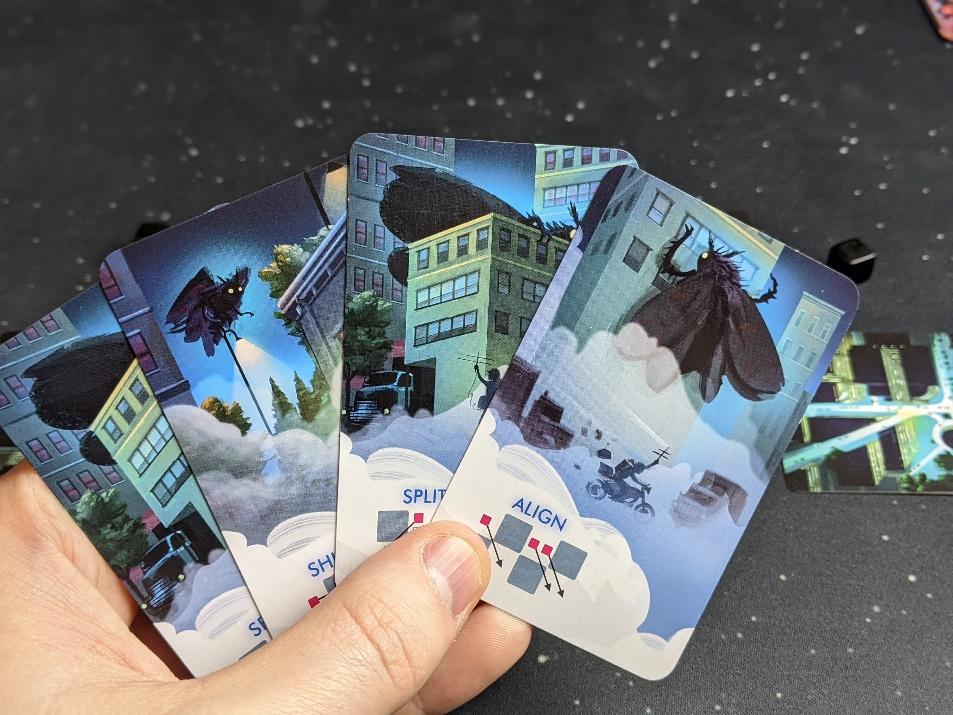 Mechanically, Urban Legends has no similarities at all to the original Cryptid. It is a head-to-head game where one player plays the Scientist and one player plays the Cryptid. The players take turns moving sensors from one row of city blocks to another, with the round ending once all the sensors have been moved from the active row to the inactive row. The Cryptid is trying to spread their presence by building a type of symmetry into how the sensors have been moved – either in specific colour of sensors that the blocks can see or the specific number – and the Scientist is trying to prevent this symmetry. Both players have the same three movements available to them, allowing them to choose between moving a group of sensors, all the sensors of one colour, or one individual sensor.

What Urban Legends does that is impressive to me is it manages to keep the sense of puzzle-solving from the original game, except instead of competing with others to solve a puzzle first, the puzzle you are solving is the other player’s actions. It feels similar but is a drastic departure from the way the original Cryptid works, which I think is good. I didn’t need another puzzle to compete with my friends to solve quickly—that’s what Wordle is for.

The original 7 Wonders uses a standard draft where you select a card from a hand of cards, pass your hand to the player beside you, and then draft another card. Players continue doing this simultaneously until all hands have been fully drafted. 7 Wonders Duel changes up the formula from its predecessor 7 Wonders by removing the draft entirely and replacing it with a new mechanism that captures the feel of drafting. 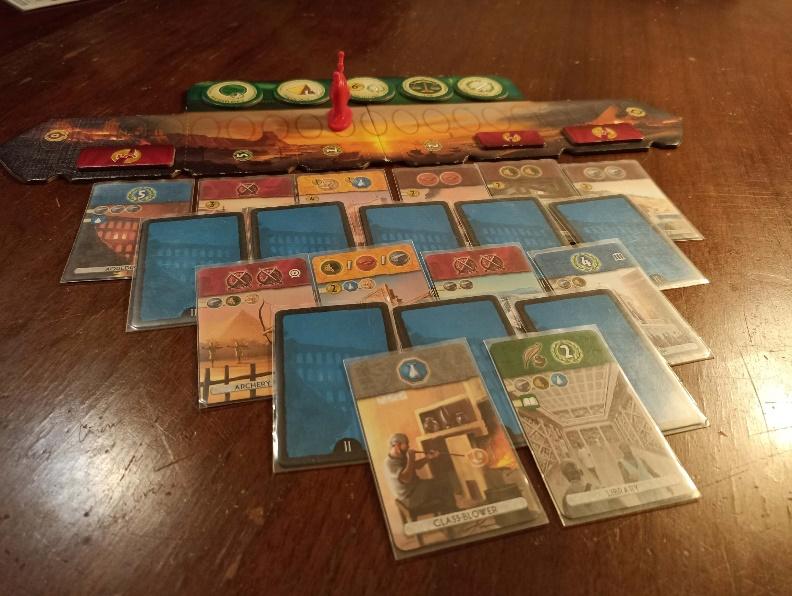 Instead of drafting from a hand, 7 Wonders Duel uses a single pyramid of cards, some faceup, some facedown, and players alternate selecting cards from the pyramid. You have the planning of what you hope will make it back to you, the surprise of what turns up in your later hands, the hate drafting. It is an impressive piece of game design where the designers captured the essence of a mechanic and built it with other mechanisms. ‘Drafting’ from this pyramid makes for a much more intriguing game than simply using an original 7 Wonders draft.

For an in-depth look at 7 Wonders: Duel from when it was released, check out David’s column from 2017.

Imhotep is unique in this list, in that the original game already works well for two players. Players alternate actions, either getting stones from a supply, placing stones onto boats, or choosing to sail a boat to a harbour. Your stones are effectively actions that get allocated later in the round, but one interesting feature in this set of mechanics is that you can never place a stone and sail a boat in the same round—you always give the other player the option to sail your precious actions to a harbour you aren’t even interested in.

Imhotep: The Duel changes up these mechanisms into a more similar alternative than either 7 Wonders Duel or Cryptid: Urban Legends. The game removes your stones and replaces them with workers and a 3×3 grid. Instead of boats getting sailed into different harbours, the six boats are linked to the columns and rows of the grid. Each column and row has its own boat, carrying their own rewards, which replace the harbours from the original game. Players alternate actions, with each player either placing down a worker or choosing to unload a boat, giving out the resources from the boat to the players who have workers in the row/column. The game maintains the tense moment of allowing the other player control over your choices, hoping they don’t see into your plans and figure out how to mess them up.

These two-player versions of games have been successful so far (mechanically at least — I have absolutely no idea about their financial success). It’s hard to put a finger on why these versions have landed so well with me, but I think one important note is that each of the games I discussed today were designed by the same person/team as the original game. Each designer took elements from the original, particularly the feeling it evokes, and built a new mechanical way to deliver that feeling. The effect is a unique game that will hit the table under entirely different circumstances. I know that I will certainly be tabling Cryptid: Urban Legends as a quick little puzzle game when it is just me and one other. Cryptid: Urban Legends releases April 28th, 2022. Look for it at your Friendly Local Game Store.