I have mice. At least, I had them. I’ve taken steps to combat the infestation and there are signs I’m winning the war. To be clear, I have nothing against the little critters. I even find them a little cute. But if they’re going to be running around the house, eating my food, not paying rent, we’re going to have a problem.

Head of Mousehold allows players to approach the situation from the perspective of the offending rodents. Up to five players will try and use their wits to lead their family of mice, avoiding traps and scuttling off with delicious cheese!

Players start with hands of cards representing five different coloured mice. They will have three cards of each different colour and some will be Squeakers, indicated by a screaming mouse icon on the card.

Mousetraps are placed out equal to the number of players, and each one is baited with a face-up cheese token, worth between 1-4 points. The start player for the round shuffles and places out the Speed cards in order. Each Speed card represents one of the five colours of mice (green, blue, white, orange, and purple). The order they take each round will determine how fast each colour of mice are.

Once they’ve seen the makeup of the board for the round, players select three Mouse cards from their hand and take Mouse meeples of the same colour as their cards and place them in front of them. If you choose a white, orange, and blue card, you’ll take Mouse meeples of those colours and place them, so the other players will know the makeup of your hand.

Just before the round starts, a Daily Event card is revealed. Five of these are randomly dealt at the start of the game. They both tweak the rules a bit and act as a timer, as the mice will have five days to get away with as much cheese as possible.

In turn order, players will place Mouse cards in front of the different traps. The first card at a trap is placed facedown, and then they alternate up and down for every subsequent card at the trap. Keeping track of what meeples a player has taken and what colour cards you can see they’ve played is important. It can become a real game of…cat and mouse (Thank you! Goodnight everybody!). 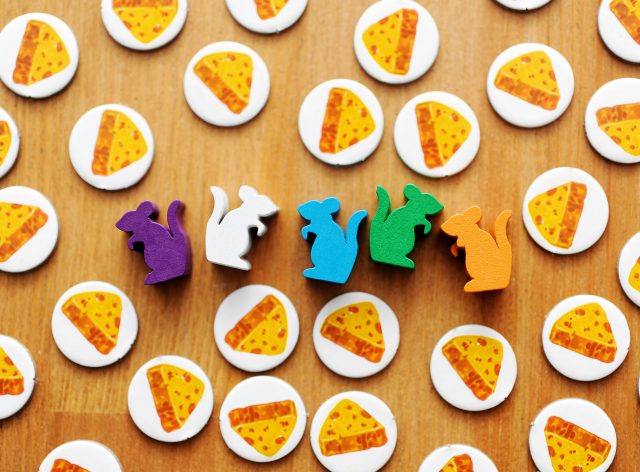 Once everyone has played out all three of their Mouse cards, they are all revealed and reordered based on the speed of the mice for that round. So, the fastest coloured mice get to the traps first. No that may sound like a good thing, but for all their wiles, these mice have eyes bigger than their brains. The first mouse to get to a trap is going to set it off and be killed! That card is removed from the game. If they were a Squeaker, they made enough noise in their death throes to attract the house cat, which obviously has not been doing their duty to keep the house rodent-free. When a Squeaker dies in the trap, the second mouse in line is also killed and removed from the game. If the first place mouse was not a Squeaker than nothing happens…besides their death. In either case, after the trap has been assessed the closest mouse will take the cheese token. All other mice in line get nothing, but live to scurry another day.

Losing mice can really handicap you (not to mention the trauma for the mouse family). If you run out of a certain colour, it can affect your strategy for a round.  You have to carefully consider the information you have at your disposal, before making a decision. Which colours did your opponents have at the start of a round? Where have they already played cards, and can you see which cards they played? Did they have a Squeaker in hand? It can be a tricky proposition to get to a trap with perfect timing. Get their too soon and you might die a quick death, but wait too long and your mouse family will go hungry with a lack of cheese.

Adam Wyse has created a fun push-your-luck, bluffing game that doesn’t take itself too seriously. There is certainly strategy to be had, but the silly theme and fast playtime allow you to enjoy the game without stressing too much about the outcome. The art is pretty cute, with each mouse clan taking up residence in a different part of the house. The little Mouse meeples are pretty adorable as well. Your mice will die throughout the course of the game, but it’s all part of the ridiculous nature.

So, who is Head of Mousehold for? I think it may be a bit too light for the heavy strategic gamer, but a tad too many decisions for a kid’s game. It hits that sweet spot of a family game that everyone can enjoy. Just make sure you don’t get too emotionally attached to the mice!

POV: Two Priests Pitch You a New, Ridiculous Board Game

Mountains of Madness: Science and Sanity

One thought on “Head of Mousehold: Rodent Problems”