What Have We Been Playing?

Another month has come and gone, and with it, some glimmers of gaming hope! Here are the gaming goodies that have hit our table during the month of June…

I got MicroMacro Crime City, and it’s been such a ton of fun. This is a “detective” game, where all of the clues are found visually on a massive line art map. Each case gives you the end point – a body, a car crashed, etc – and you have to work your way back, finding where they’ve been and what happened to them. The cases have question prompts on cards, but you can also choose to play hard mode, where you try and track down what happened without those nudges – then you check at the end to see if you were right on the money! I haven’t felt this excited playing a game in a long time, it’s been great.

There is a test case on the website for the game if you’re curious about it: https://www.micromacro-game.com/en/index.html 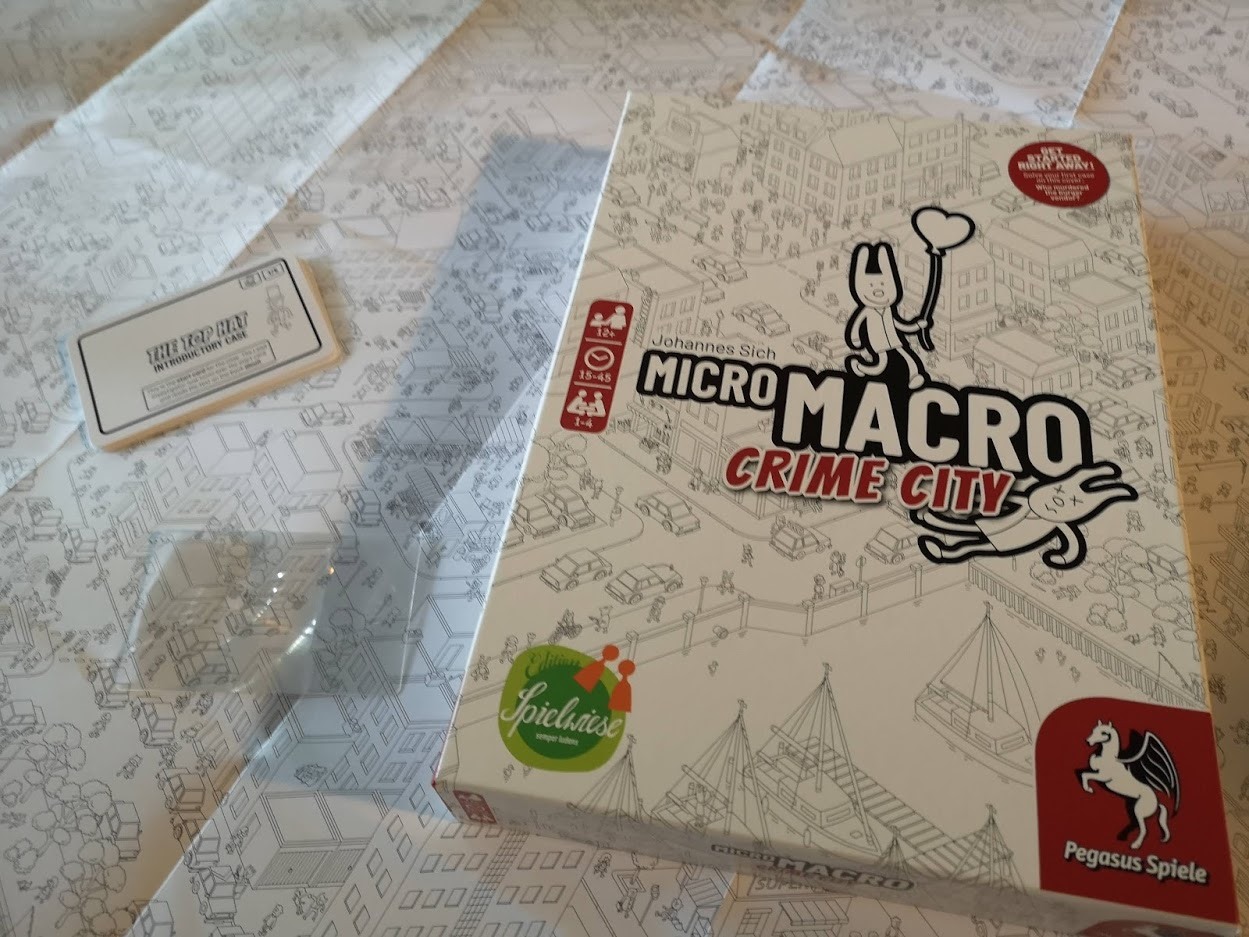 I made a few trips home to see my family and we got in a bunch of games of Euchre which was a ton of fun. Euchre is a partner trick taking game where the Jacks of the trump colour are the most powerful. You play with a shortened deck and the deal rotates as teams compete to be the first to 10 points. We also got in some games of Project L. This is a favourite of my parents. It’s a pretty and fun puzzle as you race to complete puzzles with polyomino tiles you earn or gather. It plays really quickly and there are a few different variants you can try.

For someone who was on BGA literally every day during quarantine, I haven’t played a single thing there in two months. In real life, I’ve played a ton of Herbaceous Pocket Edition, both with people and the solo game. Friends, what a delight! The art is glorious, it’s compact, it’s challenging with the push-your-luck element, and just toothy enough for its 10 minute play time. Two thumbs way up.

We also received a package from Itten Games’ recent Kickstarter, Crash Octopus (a ridiculous and ridiculously-well-produced dexterity game) and Moon Base (one of their older titles that is both meaty and visually stunning whether you win or not).

Some good friends, my 12-year-old, and I just finished our run through the Knizia legacy game My City which was everything people said it was: a whole lot of game for a surprisingly small amount of money, stressful but in chunks so it’s bearable, and just a lovely play. It reminded me strongly of a conversation I had a couple years ago after playing Pandemic Legacy: Season 1 where we wondered what it would be like to have someone design a legacy game around something low-stakes. Like, Draftosaurus Legacy or Patchwork Legacy. Behold! My City! (Relatedly, that 12-year-old and I have been developing our own fable game for Draftosaurus with 12 chapters. Perhaps we’ll share it with you when it’s done.)

At one of my gaming group’s recent sessions, we decided to see how many games purchased during quarantine we could make it through. Turns out the answer was three because we got sleepy: Ride the Rails, New York Zoo, and Railroad Ink Lush Green.

A former student invited me to playtest her professor’s game Fresh Hell, a coop game about the management and productions of a theatre company which involves a surprising amount of dealing with the theatre’s HVAC. The game is still in its early stages, but we had a great time. I’m really looking forward to playtesting a couple of other games on the docket this summer!

Finally, that same above-referenced 12-year-old and I are playing another Kickstarter game A Mending by Yin Kohr. It’s a story-telling keepsake game in which you hand-stitch on a cloth map your path from your house to an old friend’s while responding both on the map and in your very soul to questions from a deck of cards. We find it soothing and thoughtful. And when we’re done, we’ll hand it off to another friend to play and another and another so that the map becomes crossed by many relational journeys.

June was a much more exciting month for me than most of 2020 and 2021 so far. This month I got back into playing Kingdom Death: Monster and have gotten dozens of plays in.

Kingdom Death: Monster (KDM) is one of my favourite games and is my absolute favourite use of cards to create “Artificial Intelligence”. For those unfamiliar with KDM, it is a two part game where you spend half the time fighting monsters and the other half of the game building up a settlement. With a hardcover rulebook and beautiful illustrations and miniatures, KDM sets the atmosphere excellently and pulls you into the world of the designer’s twisted mind. Whether fighting a lion with weirdly human paws or an antelope that can gobble you up in its chest cavity, or a phoenix with over thirty hands where there should be feathers, KDM turns the fetishized horror aesthetic up to 11.

Given how short these little segments are, I’ll talk about the skirmish a little and leave the settlement building aspect unexplained. KDM uses a grid to facilitate the combat against various monsters. While you fight these monsters, you will use different weapons and attacks to try to land hits and damage against the monster. Each enemy has two unique decks: a Hit Location deck and an Artificial Intelligence deck (which also functions as its health). Each attack on a monster will potentially wound a different location, leading to a variety of different effects (good or bad). The monster’s attacks are determined by the AI deck. As the deck thins and the players damage the monster, the monster might start to act in a more unusual (and often more predictable) way. Learning these decks will make fighting the various monsters more rewarding and allow more cleverly laid plans. KDM’s combat is filled with delightful discoveries like this that, even after dozens and dozens of plays, still make the sessions exciting.

Board Game Arena has still been responsible for the lion’s share of my gaming, but I have added some new games to my collection and played physical games in person with people. My favourite new addition has been Tribe, from Itten Games, designed by Naotaka Shimamoto. It’s a wonderful dexterity game about draping ornaments on wooden people. Also played a face to face game of North star Games’ Evolution by Dominic Crapuchettes, Dmitry Knorre, & Sergey Machin. It’s a great entry level strategy game about evolving animal species to eat the most food, and thus be the most successful creatures.

Thank you for joining us for another monthly rundown of the games we’ve been playing!