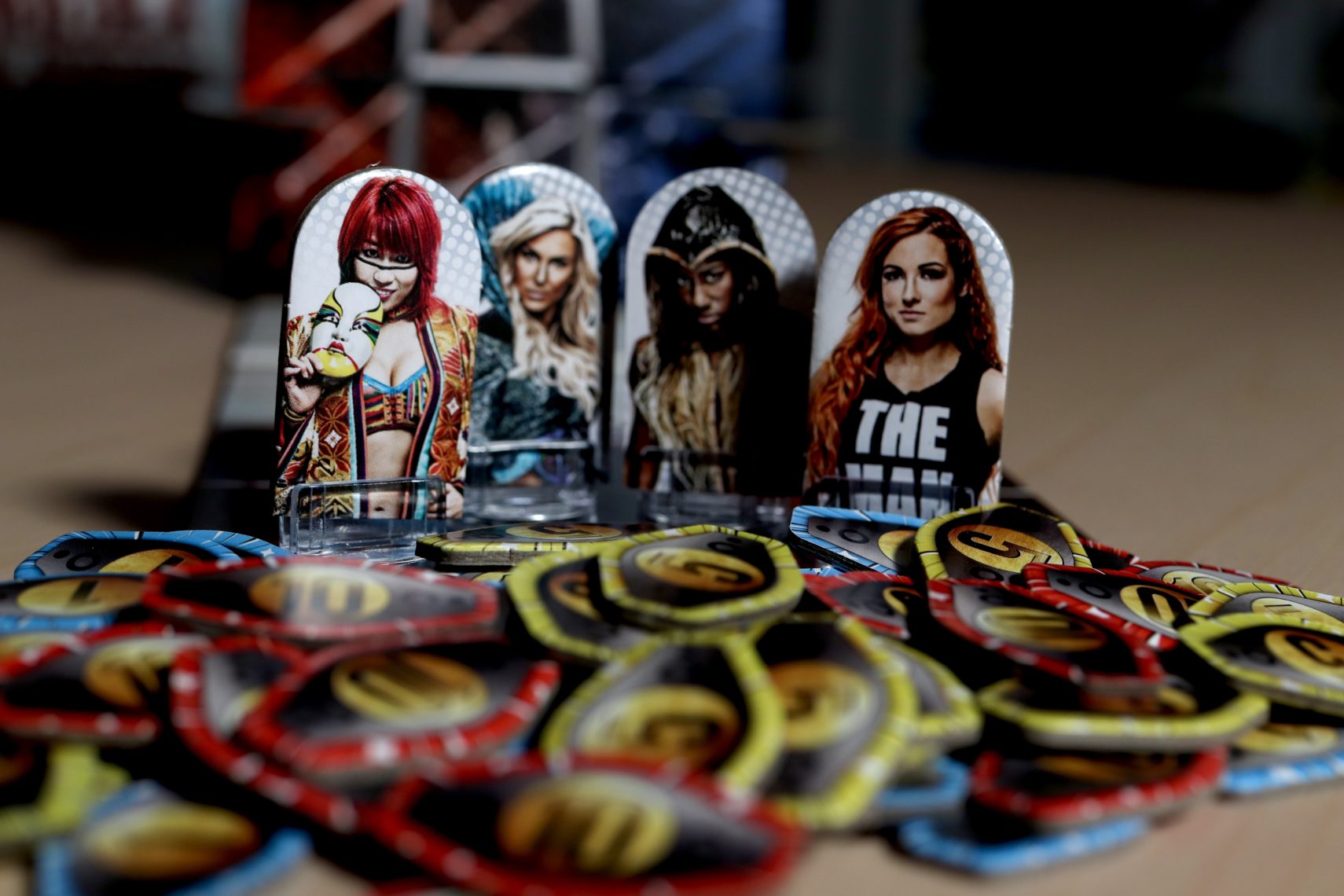 My girls and I were recently playing a goofy game of Banana Matcho, when out of the corner of her eye Big Bean spotted WWE Headlock, Paper, Scissors on the shelf. Each side of the game box features a different pro wrestler, and it just so happened that she was staring at the image of Charlotte Flair, the daughter of wrestling legend Ric Flair.

Over the last several years, WWE has made some great strides in the way female wrestlers are presented on screen. However, I wouldn’t necessarily say that representation always carries over to their commercial products. So it was significant for my daughter to notice a strong woman presented on this game box. She also remarked on how Charlotte’s costume made her look like a fancy bird, and she immediately asked that we play that game next.

Headlock, Paper, Scissors is published by WizKids, with a design trio of Josh Cappel, Jay Cormier, and Sen-Foong Lim. The game can be enjoyed with 3 to 6 players, should last 30 to 45 minutes, and is recommended for ages 12 and older.

The setting of the game is the WWE’s Money in the Bank pay-per-view event, where a group of wrestlers are throwing each other in and around the ring, trying to find the right opportunity to climb a ladder and grab the briefcase that grants them a future WWE Championship match. To emulate this event, Headlock Paper Scissors includes a cardboard ladder in the box, along with a board that players can advance towards the ladder on. It’s a small touch that goes a long way to immersing players in the WWE universe.

Pretty much everyone of almost any age is already familiar with the basics of Rock, Paper, Scissors. The design team leans into this broad community knowledge, using a variety of similar gestures along with the mechanical bones of Rock, Paper, Wizard (a D&D themed party game). The four main gestures are pictured below – Throw, Strike, Hold, and Showboat – the effect of which will change throughout the game, keeping players on their toes.

Much like the classic party game Cash N Guns, players will execute their moves by simultaneously choosing a hand gesture (following the chant of “MONEY! IN! THE BANK!”) and pointing it at another player. A ring bell passes around the table, and whoever holds it will be the first to execute their attack. Most of the attacks will change which players are closest to the ladder, so timing is critical to make sure their wrestler is the first to reach the climbing apparatus.

However, just being the first player to climb to the top of the ladder is not enough to secure victory. The winning player must also earn enough “popularity”, represented by rather adorable championship tokens. If at the end of a round, a player has 20 tokens and is on the ladder, they win the game. Otherwise, the first player to collect 25 popularity (even if not on the ladder) will claim the coveted Money in the Bank briefcase.

To add even more flavour to this suplex soup, each character board features a momentum meter, which can be spent to execute signature attacks – AJ Styles’ Phenomenal Forearm, for instance. When used at the right moment, these flashy finishing moves can dramatically alter player orientations on the board, and potentially launch a character into the winning position. The best moments in wrestling history have largely been about quality storytelling, and this mechanism really does an excellent job of injecting drama into the game!

Although players with an affinity for pro wrestling are obviously going to enjoy this game, my non-wrestlemaniac players who have dared try out Headlock Paper Wizard all wound up laughing and getting into the goofy spirit of the game. Since most wrestlers have their popular catchphrases, I would have loved to see these printed on the wrestler mats to encourage trash talk between rounds. Regardless, plenty of rowdy wrasslin’ energy emerged in my games, which makes it a great game choice for the wrestling fan that wants to rope hesitant friends into their world of choreographed violence!

Now, let’s loop back to Charlotte Flair and her fancy bird costume. Over the years, wrestling board games have predominantly featured white men as the important (and sometimes only) characters to play. Fortunately, Headlock Paper Scissors makes great strides to correct this exclusionary oversight. Of the 12 playable characters in Headlock Paper Scissors, six are women, with five of the available wrestlers being people of colour. Perhaps just as important, all of the characters included are relevant and popular in today’s WWE landscape, which speaks to how the television product itself is intentionally becoming more inclusive.

Big Bean, who has virtually no interest in my wrestling fandom, asked to play Headlock Paper Scissors because she saw herself represented on the box. That was a powerful moment for me to absorb, and I’m hopeful that she is not alone in that spark of imagination! Despite my having to improvise some child-friendly rules to include both Big and Little Bean, we had a blast racing toward the Money in the Bank ladder and seeing which of us will be a future Champion.

In the words of Charlotte and her father Ric … “WOOOOOO!”

WHAT HAVE WE BEEN PLAYING?

The Return of Ryu