FIVE NEW TWO-PLAYER GAMES, or WHASSAP WITH ALL THE DUELS? 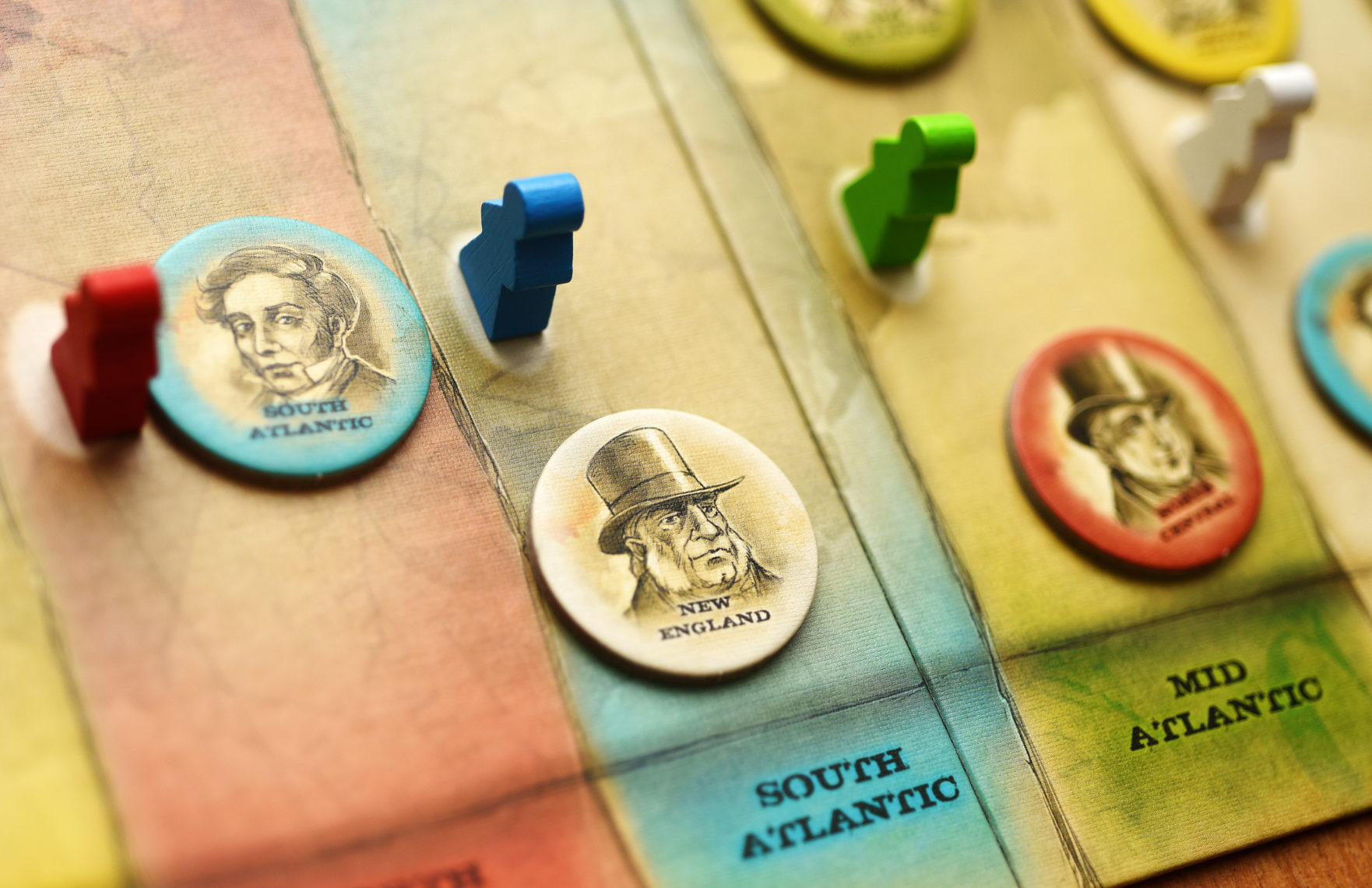 Is it because summer is cottage season, and publishers anticipate a huge pent-up demand for cozy little games for couples to play on the weekend? Or is it just statistical noise, coincidence? The fact remains, there have been so many good two-player games released recently that I started to worry about how I would write about them all. Then my good friend Listicle came to the rescue. So here in alphabetical order are five short profiles of new(-ish) games for you and a friend to enjoy. Some of them are dated earlier on BGG, probably because that is when they were announced or originally scheduled to be released, but I swear, they all hit the ground in the last few months.

Claim is by Scott Almes, designer of the excellent Tiny Epic series for Gamelyn Games, so I’ll always give his games a look-see. Besides, good/interesting trick-taking games for two are rare. Last year’s Fox in the Forest didn’t really do it for me; the last one that I liked was Travis Worthington’s Triumverate and that was ten years ago. Claim is even better because it’s easier to understand and the way it’s split into two separate phases of 13 tricks each is really interesting. The object of the game is to dominate three of the deck’s five suits by having the most cards in that suit by game’s end. Each suit has a special ability: döpplegangers count as any suit, for instance, while any knight will beat a goblin. In Phase One the top of the draw deck is turned over and players compete to win it–which means they get to use it in Phase Two. (They also get to add any Undead card played to their Score pile immediately.) The loser gets a rando facedown card–could be good, could be bad. In Phase Two the winner of each trick gets to keep both cards played–except that any and all Dwarves played go to the loser. After the last trick players compare their faction strengths and determine the winner. There are all sorts of neat tactical and strategic decisions to make, and the need to dominate a majority of factions means you can only afford to ignore two suits (at most). Lots of replayability in this little sucker.

Harry Potter Hogwarts Battle: Defence Against the Dark Arts uses the same system as its co-operative predecessor but this time players are competing to see who can be the first to score three stuns by causing enough damage. Once a player is stunned, everything is reset for the next round. For you Muggles out there, it’s a head-to-head Deckbuilder not unlike, say, Star Realms, complete with House (faction) abilities. But if you’re familiar with Hogwarts Battle (and you should be) there will be little to learn and you can practically dive right in. The only new wrinkle is you get to choose a pet to add to your starting deck–in theory you could both choose the same one. There is some discussion online about how balanced the Houses and pets are. In my first game my Toad’s ability to heal every turn really frustrated my opponent, who had chosen the Owl. Certainly much turns on the luck of the draw (as it does in the co-op version) and it is hard to catch up if you fall behind unless you are very disciplined with your deck-building. Despite its potential faults, if you are a Potterite this is a no-brainer purchase.

Iron Curtain is by the same duo who designed the excellent 13 Days and the…interesting 13 Minutes. These Danes certainly like their Cold War because they’ve returned with yet another game with the same theme and some similar mechanics, yet it really does a surprisingly good job of distilling the Twilight Struggle era down to 18 cards and a handful of cubes. While obviously it can’t go as deep into the lore or paranoia-driven strategy of the period, Iron Curtain manages to evoke much of the same tense decision-making moments through a very elegant mix of area control with the genre’s traditional multi-use card play with a layer of positional strategy. Like Claim, the game is split into two phases (here called “rounds”) consisting of four turns each. In the first round players get five cards and have to decide which one to lay aside for endgame scoring. Each card represents a country and has an Event which is favorable to either the US or USSR. If you play one of your own cards, you must choose whether to play it for the Event or use its cube value to drop Operations cubes; if it’s your opponent’s Event she gets to trigger it after you use it for Operations. The object is to Dominate by having a majority of cubes on a majority of the cards in each continent. Once your opponent has control of a country it’s more expensive to put influence there unless you Infiltrate, but you can’t afford to spread yourself thin, as you have a limited supply of cubes. I must say I am very impressed with how well Iron Curtain abstracts the complex calculations of Twilight Struggle down to a 45-minute game.

Microbrew turned up in my FLGS after a successful Kickstarter and packs a whole lotta spiked punch into a mint-sized tin. Players compete to secure the most loyal customers by brewing different ales. The game is worker-placement with an original brewing mechanic which is like a sliding-block-type puzzle. The rules, components, and art are exceptionally well-executed, and there is a challenging solo mode as well. And everything does, in theory at least, fit into that tiny tin! I look forward to more exceptional games from publishers One Free Elephant.

Revolution of 1828 is by auteur Stefan Feld which in itself makes the game interesting; he hasn’t released a two-player game since 2009’s Pillars of the Earth: Builders’ Duel. Plus the game’s theme is at once timely and arcane: the American presidential election of 1828, which was hotly-contested, highly partisan, and featured much mudslinging. John Quincy Adams, the incumbent, a distinguished diplomat and son of Founding Father John Adams, had to defend himself against hot-headed, uncouth, and “man of the people” Andrew Jackson, hero of the War of 1812, who claimed the election of 1824 had been stolen from him by an unholy backroom bargain. As juicy as the theme is, the game itself is pretty abstract, being a sort of multi-pronged four-round version mixture of tug of war and the classic Nim. Every round random tokens are placed in the middle of five electoral “battlegrounds” as well as a sixth representing the Media. Players take turns drafting these tokens to give them support in each region, aiming if possible to be the last player to remove a token from a region because of the elector bonus it gives. On the other hand, you don’t want to “win” the Media because it will cost you points. I’m not sure 1828 has the same “legs” as, say, Lost Cities, to which it bears a slight similarity, but Feld Fans (of which there are many) will want to take a look.

Lots to dig into for you gaming couples out there. Let us know what you think!

A review copy of 1828 was provided for this article.

KEYFORGE: CALL OF THE ARCHONS: WELCOME TO THE JUNGLE

New Geek in Town: A look at the Redesigned BGG