When I was in university I read a short piece by Stephen King: “Everything You Need to Know About Writing Successfully—in Ten Minutes”. It was for a magazine called The Writer, and was in an anthology loaned to me by a friend in residence (hi Jayne!), and I’m delighted to see that it’s made its way to the interwebs here (you need to scroll down a bit, and it reads just as true today as it did then).

This piece saved my sanity several times in the coming years–as a songwriter, performer, teacher, and ultimately amateur game designer–because his advice applies to any creative endeavour.

These are the two paragraphs that truly saved my sanity:

Show your piece to a number of people—ten, let us say. Listen carefully to what they tell you. Smile and nod a lot. Then review what was said very carefully. If your critics are all telling you the same thing about some facet of your story—a plot twist that doesn’t work, a character who rings false, stilted narrative, or half a dozen other possibles—change that facet.

It doesn’t matter if you really liked that twist of that character; if a lot of people are telling you something is wrong with your piece, it is. If seven or eight of them are hitting on that same thing, I’d still suggest changing it. But if everyone—or even most everyone—is criticizing something different, you can safely disregard what all of them say.

The first time this advice saved my sanity was when my band was recording its first (and as it turns out only) album. I used to play mixes for friends, and everyone had an opinion, and everyone had at least one piece of criticism: can’t hear the bass; the bass is too loud; you’re speeding up; you’re slowing down; yada yada. And if I hadn’t had King’s advice to hold onto I would have drowned in a sea of self-pity and disgust.

But as it turns out, almost all the time people were criticizing different things, so I was able to tune them out. But when two or three people noticed the same thing, I knew it had to be fixed. Getting that feedback was really important, and helped the final product.

And so it goes with game design. 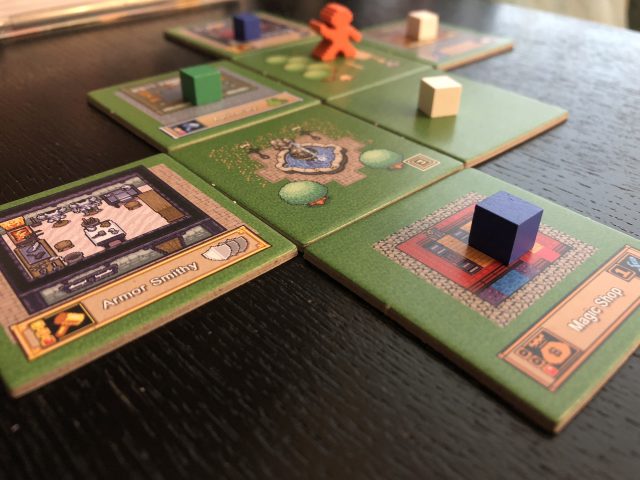 Most fledgling designers or publishers, I would dare to say, are incredibly passionate people. In many cases they have made considerable sacrifices to make their vision a reality. They pour so much time and money into their dream, hoping that this dedication will pay off–almost assuming it will pay off. As in: “how will people not see how awesome this game is?”

Why then do so many games not deliver–and I don’t mean literally (that’s a whole other story)?

I think it’s because the designers failed to get that crucial feedback. Otherwise you end up with a game that has many things going for it but scores on its own net in ways that stop it from achieving its full potential. ((cough Myth cough))

And so we come to Hero’s Crossing, first published design by Brian Sowers through his company One Method Monkey. The game’s intro is cute and to the point:

“Monsters and madmen are everywhere. Glory awaits the stalwart heroes who would stand against the forces of evil.

“You are not one of those heroes.

“You’re the people behind the heroes — the shopkeepers and the smithies and the potion brewers who outfit adventurers with the gear necessary to undertake their quests.”

Each player takes the role of mayor of an RPG town who is competing with rival towns to produce and sell stuff to heroes. Basically, whoever sells more stuff to the heroes and builds more and better buildings is the bestest mayor and gets to wear a sash and talk like Mayor Quimby. You achieve this by bidding on building tiles which you add to your town, producing stuff (in the form of cubes, of course), sending it to the appropriate shop, and trying to attract a hero’s attention to sell it to them for VP.

Each round starts by drawing an Action card from a small deck. Each Action card divides the eight possible actions into four pairs; during that turn, for example, if you want to Bid on a building, the only other thing you can do is Expel a spy.

Then a die is rolled to determine the “zoning restriction” for that turn, limiting where players can place tiles. If the same face comes up several times in a row your towns are going to look like icicles hanging from an eavestrough.

This is followed by the meat of the turn: rolling your resource dice and drafting them to take actions. Each player starts the round with four different coloured dice, each keyed to a specific resource. Almost every action involves spending a die to activate the action, and the number of pips is either the power of that action or must meet a minimum (or maximum) threshold to use it. This is one part that really could have used individual summary cards for each player; the Quick Reference on the back of the rules was great, but each player really needs their own copy.

One twist during Dice Drafting is that you can forcibly swap one of your dice for one of your opponents’ dice if it’s the colour and number you need. To compensate them for this you must also hand over a “+1” token (these are very handy to modify dice results a la Castles of Burgundy).

After all the dice have been drafted players check to see whether any of the available heros buys stuff from anyone. Level 1 heroes don’t need much stuff; Level 3 heroes need tons. If you angle your way to selling a hero the last thing she needs, she becomes a Permanent Customer–you gain her, which gets you VP as well as special powers.

Finally, everything is cleaned up and reset for the next round, and away we go again until all the heroes have entered the game or had their needs satisfied.

Hero’s Crossing is a good Euro with a fantasy theme. It puts some twists on some well-worn mechanics such as dice-worker placement and action selection. Its dice-swapping and spying mechanics inject some (un)healthy player interaction, but there are ways to mitigate the damage it causes. It has good pacing and gameflow. There’s a decent solo mode and a video tutorial available if reading isn’t your thing. And the production quality and 8-bit RPG graphics are charming–the meeples in particular are a triumph.

But there are a few “own goals” that get in the way, and I wonder if Sowers asked for and got those crucial bits of feedback that could have swept those issues aside.

The first and most crucial in the case of Hero’s Crossing is the box art. Which is gorgeous, by the way–but it’s in a completely different graphic style than the components in the box. Why?? If you’re marketing the game using 8-bit nostalgia, that should be reflected consistently in the game materials, no matter how beautiful they may be.

Second to me is the Zoning diceroll. I think it was put in there to solve play balance and/or tile-placement issues, but it’s random and arbitrary and I think there could have been a more elegant solution.

Next are the rules, which are comprehensive and good but could have been better organized. The sections on Free Actions and Era Progression should not have been stuck near the end of the rules, and I would have put page references in the Round Flow explanation so you don’t have to keep flipping around to find the pertinent rules.

Finally, and in this case I admit this is a matter of taste, but while I found the Dual Action system original and interesting, I don’t see how it works thematically. Like, today we get to Move and Expel a spy, but tomorrow if you want to Move you have to Bid on a building…why? Considering how natural the rest of the rules mesh with the theme (yes, even the Zoning die roll), the addition of Dual Actions as a mechanic seems unnecessary. Just let players take two actions on their turn. Or come up with a funny explanation/justification for it. You’d be amazed how powerful funny explanations/justifications can be (check out Galaxy Trucker for many many examples).

In conclusion, in this era of Peak Tabletop, it is easier than ever to achieve your lifelong dream of designing and publishing your own boardgame. But the popularity of the hobby is also a downside, in that major companies’ release schedules are more crowded than ever, and everyone seems to know someone who’s either working on or kickstarting or self-publishing something.

The challenge, then, is not just to create a boardgame, but once it’s done to get multiple pieces of feedback from many sources to create something special and unique, something that will stand out from the crowd.

And if I knew for sure how to do that, I wouldn’t be writing this–I’d be down in my man-cave working on my dream project right now.

Thanks to One Method Monkey for providing a copy of Hero’s Crossing for this article.

Sakura: A Walk in the Garden