If Paperback was lounging on a beach blanket reading a pulp novel with oversized sunglasses and hat, then Hardback is the serious older goth sibling that’s hovering around on the library ladder pulling dusty tomes off the shelves to read in a wingback chair by the fire. Given that Hardback is Tim Fowers and Jeff Beck’s follow-up to Paperback, there are bound to be comparisons – they’re both deck builders, and they’re both thematically similar. I’m going to try and give you my overall impressions without relying too much on comparisons, though.

Stepping back in time from the retro pulp of Paperback, Hardback calls to a Victorian era of heavy tomes, gold lettering and ink spills. In the days of yore, one might discover books through a friend, an author’s tour, society pages and the like. In the age of ebooks, we still rely a good amount on the recommendations of friends, but increasingly on reviews through sites like Amazon and Goodreads – and we do the same for board games on sites like BoardGameGeek. But how often have you seen the parts of a game broken down into star ratings? Crack out the quills and get your bookmarks ready.

Deckbuilding, ★★★★ – Starting with a basic deck of letters, players are also given a riveting addition of two random “prestige” letters to their repertoire. With a nuanced change of the way wildcards work in Hardback – that is, any card can be wild when flipped face down – the game challenges literary conventions. With a heart that is basic deckbuilding, but a fresh addition of more combinations and special abilities, creating words to collect money is given the extra fun of also generating points. Round after round, readers will be doing their best to reach for 60 points on the prestige track to win the game – I couldn’t put this one down!

Card Genres, ★★★★★ – A compelling, pitch-perfect transformation of the overall vibe of books for this game. Not only are the genres – mystery, horror, adventure, romance – timeless classics, they add some spice to gameplay. Building up your deck throughout the game can allow readers to engage with those genres by playing combos in their words, triggering bonus abilities that will generate a lot more money and points – not to mention allowing them to gain ink (or remover), reserve and trash cards, and even reveal wilds to score. What a page-turner!

Ink & ink remover tokens, ★★★ – In order to power-up your word creation, ink allows you to spend a token to draw an extra card to use on your turn. There is a gritty, riveting push your luck aspect to this chapter of the game, however – any card you do turn over must be used in that word unless you have some ink remover on hand. This part for me is fun, but didn’t feel like a necessary plot element – that said, it is pretty much the only way you’ll be able to create words with more than 5 letters. Perhaps furiously using ink should be more of a strategy to expedite the game to its grisly end!

Player interaction, ★★★ – Although it can be a bit of a reach, Hardback does its best to encourage player interaction throughout its pages. If readers are having difficulty with their vocabulary, letters seeming to jumble rather than fall into place, they can ask for the help of a “ghost writer” – that is, show your cards for all to see; anyone that can wrestle them into scoring for you will get ink for their troubles. A character that pops up a little more frequently are the “timeless classic” cards. These cards, when played, stay out from round to round allowing you the benefits of the card – and where the interaction comes in is that other players can use the letter on there to create a word on their turn, which then shifts it to your discard pile. Just rude, like someone talking loudly at the library. Overall these are the only real aspects of player interaction, other than, obviously, pushing to beat each others’ scores – it can add some interest, but I don’t feel it’s fully realized.

Components and art, ★★★★★ – The aesthetic of this game is just perfect. In the tradition of old-style books, each genre’s art is a timely match to its overall vibe, with gothic and flourishing lettering giving a hint of adventure (or otherwise) – everything’s got that slightly weathered hardback look, and I love the overall palette of colours. Ryan Goldsberry has done a fabulous job of making this game look great. The cards are not immaculate quality, but they are suitable for occasional play; the colours and iconography are clear, too, which allows for differentiation for colour-blind players and the text isn’t so small that it proves difficult for sight-impaired players – it’s no large text format, but it’s something! And, those little score-marker book meeples deserve a footnote, what a lovely embellishment!

Variants, ★★★ – Now, I may have been a bit harsh earlier on the lack of player interaction and not as much drive to play longer words – and there’s a variant to help with that! Literary Awards encourage players to beat each other to 7+ character words in order to score bonus prestige – and the right to boast about their verbosity! Also helping the scoring accelerate is the “adverts” variant, which lets players spend their hard earned authors royalties on prestige points directly, rather than cards. With more advanced readers, the player powers and events could be fun – but I think when folks are playing at an introductory level I’d leave it with awards and adverts, to be honest. There can be too much of a good thing – and the longer the book, the heavier it is to hold up and keep interested in, after all. Many hands can make light work, however – and there’s a co-operative variant that pits players against archrival “Penny Dreadful”, which I have on my “to read” list for later.

Reading Time ★★★ – Reader, beware! If you’re more for a lighter read, you may be interested in scaling back from the full player count which can run up to an hour and a half. I think the sweet spot for this is 3 players, but experienced folks could bump up the player count a bit if they know what they’re doing.

If this sounds like your kind of loquacious adventure, settle in with a nice cup of tea and enjoy the story.

Hardback is a deckbuilding word game for 1 – 5 players, taking between 45 – 90 minutes. It is designed by Tim Fowers and Jeff Beck, with art by Ryan Goldsberry, published by Fowers Games. Thanks to Fowers Games for sending us a copy of Hardback to play. 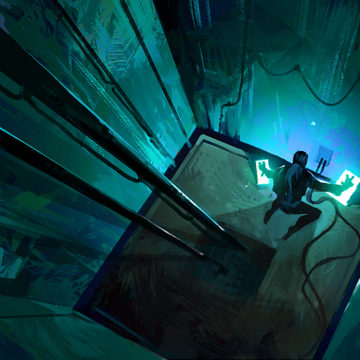 The Mechanisms of In Too Deep

The Game Changers: Resistance is Not Futile, Part 2