In the world of Sentient, players are lucky enough to co-exist with sentient robots tasked with all sorts of jobs in industry, technology and the like (you know, like Skynet but.. way cooler and much less murder-y?). Things aren’t 100% there yet, though, which means that the game consists of taking on robots to program and calibrate, and hoping that you will do all this well enough to have investors pay up big in points for you at the end of the game. The first couple of times I saw this being played, I couldn’t really grasp what players were doing from the looking on – as soon as I sat in on a demo at Origins in June it just clicked, all the little pieces falling into place. I’ve been enjoying it enormously since!

While all of the above sounds pretty thematic, when it comes down to it the gameplay of Sentient is fairly abstracted. Over three rounds, your primary actions will be: placing workers (agents) to select cards (robots) and gain majorities over investor tokens, and then placing robots in your corp’s tableau and manipulating dice values to satisfy certain conditions for points. All these reasonably straightforward decisions have enough ramifications that you have to juggle around before making that final choice. All of it’s informed by stepping back and looking at the scope of the game – playing through three rounds overall, looking to make the best decisions for every round, but considering game end scoring at the same time. How best to efficiently point-grab throughout those rounds without leaving yourself without the right investors at the end of the game? It’s not just dice that need calibrating as you play through Sentient. Grind the gears of that brain and get math-ing, friends!

Each round, 5 investor tokens (1 of each type – industry, service, transport, military and information) are laid out randomly, and 4 cards are set up in the spaces between. By placing an agent pawn, you’re indicating you’d like to take the card underneath and also be aiming to gain a majority of one or more of the investor tokens adjacent for the end of round. The cards will be one of the variety of the 5 types of robots, each having a certain condition to meet in order to gain points. When you place an agent pawn and take a card, you’ll then have to decide the slot in which to place them on your corporation board between two dice, adjusting their face value depending on the card’s indicator (+, – or =). This is where the math kicks into gear – each of the conditions is something like “total of dice must be greater than or equal to 9”, “8 minus the lowest value of dice on either side” or even having one or both dice showing a particular value. The balance between taking cards that might be worth extra points at the end of the game versus points right now and not messing up calibrated dice for other cards is a delicate one.

On top of the decision of which robots to take and install, you’re aiming for a majority to win one or more investor tokens which end up as points-multipliers at the end of the game. While you must place one agent each turn in the round to do this and take a card (except for when you choose to pass and come back to this), you also have the opportunity to bolster your majority by throwing out some assistants with your agent. Early in the round it can be tough to commit to this, because assistants have a second use as blockers to the dice-manipulating values on each robot card you take – just in case you can’t bear to make any changes. As the round goes on, getting some assistants out there can be especially helpful when you haven’t had a chance to take cards from certain slots where the investors would be particularly helpful to you. Push your luck just enough, and it’s worth it from round to round. By the end of your third round you’ll be trying to get in there to snipe certain types of cards for game-end points, or desperately hoping you can eke out the majority for an investor that’s going to pay off for the card you’ve already gotten.

I mentioned earlier that when I’d seen Sentient out on tables being played, I didn’t quite grasp what was going on. The iconography of the game can just be a little like hieroglyphics if you’re not sure what you’re looking at. After a demo run through of rules, and my first game, I now don’t have to refer to the breakdown in the rules of what each card means – which shows the strength of the card design. 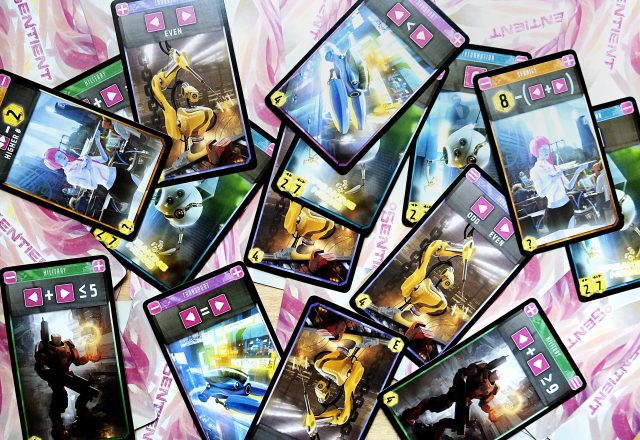 Decisions are now only slow because of me crunching the gears to maximize my benefits thanks to calibration! Beyond the iconography, the art and the colour palette used in this game is like candy. Gorgeous pastels and Blade Runner-esque neon tones mix beautifully to remind you that this isn’t just about cranking some math out, but the optimization of robots to woo certain future-world investors. My only concern is with the similarity of some of the colours used for cards/investor tokens, and I’ve mixed up a couple of the dice colours once or twice. As I’ve experienced with all the recent Renegade Games releases I’ve tried, the quality of components hasn’t been skimped on – in Sentient this means chunky engraved dice, tarot-sized cards and substantial cardboard tokens. It’s a pleasure to lay this all out and enjoy the table presence of the game as well as the solid game that’s there under all the shiny goodness.

So, if you’re interested in a game with a number of smart choices to make, a little area majority and dice manipulation, with a dose of mid-weight strategy tied up in a lovely science-fiction bow, I highly recommend Sentient. I’ve been enthusiastic to not just get this on my table a number of times, but have also enjoyed teaching it which is a rare treat for me, indeed!

Sentient from Renegade Games is for 2 – 4 players and takes about 30 – 60 minutes. Designed by J. Alex Kevern with art by Chris Ostrowski, it will be released at Gen Con. Thanks so much to Renegade for this review copy!

In A Grove: Finding A Killer

Silver and Gold: No Need to Hunt for a Simple Treasure Game