We’re coming to the end of another banner year for tabletop gaming. The last couple of months, in particular, have seen much-awaited releases landing one after the other like mortar shots: Hero Realms: Ruin of Thandar Campaign, bam! Civilization: A New Dawn, bam! Fallout, boom! Imperial Assault: Legends of the Alliance, kapow! Charterstone, kablooey! I’m feeling something akin to shell-shock, desperately trying to find the time to savour the excellence of all these new arrivals, beginning to feel a bit like Mr. Creosote from The Meaning of Life.

A no-brainer, really. A game that reaches #2 on the BGG rankings the year it releases must have something; it can’t just be hype. And I assure you, it is not. Essentially Skyrim-in-a-box, Gloomhaven is a legacy-style RPG set in a rich sandbox world that doesn’t require a GM. The learning curve is a bit steep, and the 100+ scenarios included are not easy to beat–but there are ways to cheat scale back difficulty, and the designer encourages players to do so if it means being able to continue. It’s a huge box of gorgeous components and rich storytelling. What more do you want? 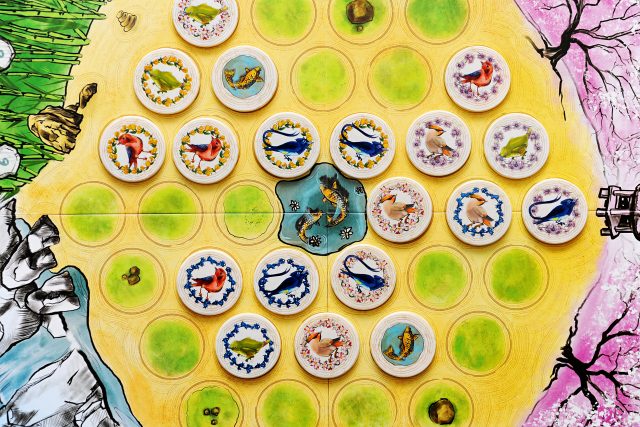 Hard to choose just one, but in terms of overall aesthetic that enriches gameplay rather than attracting attention to itself, Seikatsu’s flowers, birds, and koi ponds is at once attractive and, like the best Zen brush-paintings, understated.

It’s still too early to judge whether Pandemic Legacy: Season 2 will live up to its predecessor, and the co-operative field has become so crowded with earnest “fight-off-encroaching-doom” games that I just have to pick this light romp which plays out in real time–yup, the title is literally true. Scales great from 2 to 5, definitely kid- and family-friendly, perfect for the classroom or Family Game Night.

Turns a great little card-engine Euro into a co-operative campaign. Makes the theme come alive. Leaves you hanging at the end–good thing the sequel is due sometime in 2018.

Although trick-taking games made a big comeback this year, my vote goes to this elegant descendant of the old classic Acquire that scales well with 2, 3, or 4 and whose nature-themed art makes it pop when it comes to table.

Deckbuilding? Race game with no VP? Modular map tiles? Who is this? Surely not the good Doctor. And yet, indeed, it is. Along with the release of King’s Road (previously unavailable on its own), Knizia makes a case that he’s still the master of doing more with less, making games whose simple rules mask deep gameplay and interesting decisions.

In terms of getting bang for your buck, it’s hard to beat this latest in the “Tiny Epic” series from Scott Almes. The almost-Zelda-but-not-enough-to-be-actionable artwork always brings onlookers to the table, but it is those ITEMeeples that always seal the deal. Arming your little dudes with swords, shield and magic loot is just hot. Oh, and the gameplay is pretty amazing, too.

Oh sure, you could collect spice. But this drafting and set-collection game has rules that are easy to learn and teach, a charming theme and graphics, a decent mix of chance and strategy, and best of all–cat toys!

Just when you thought Matt Leacock couldn’t simplify his co-op formula any more, he brings us this outer-space twist on Snakes & Ladders. It’s language-independent, has enough interesting decisions to keep older kids engaged, and the mole-rats are SO CUTE!

Their individual c.v.’s pre-2017 are almost blank; Hajek had worked on some Descent modules and a Wiz-War expansion, and Fischer is totally new to the scene. Together, they worked on Fallout: The Board Game, which is a deft and enjoyable port of Bethesda’s post-apocalyptic franchise. On top of that, Fischer also designed the new Runewars Miniatures Game. So yeah, these guys had a great 2017.

Chvátl and Eaton turn Codenames into a two-player game that can be played campaign-style or expanded into group-play. Perfect for date nights or groups that prefer co-operation to competition.

I’m torn here. There’s Restoration Games’ loving reissue of my childhood favorite Stop Thief!, now brought up to code design-wise and soon to include solo and co-operative modes (cue foot-tapping sounds). And then there’s Martin Wallace and Osprey Games’ London (2nd edition) which–as often happens with good ol’ Martin–fixes the rules of the original to make a game that actually works. I refuse to choose!

I’ve never read 20,000 Leagues Under the Sea, but having played this luxury Victory Point Games release I now feel like I have. This solitaire game lets you take the helm of the Nautilus and prowl the world’s oceans in search of knowledge, profit, or just plain revenge. You choose. Each replay tells a different story. So not only an original theme, but beautifully-executed and immersive.

The field became a lot more crowded this month with the appearance of not only Fallout: The Board Game but also a re-boot of Sid Meier’s Civilization, both of which are excellent. However, in terms of originality, immersiveness, and innovative gameplay, I’d still pick Michal Oracz’s take on this indie hit from late 2014. Not for everyone, admittedly, but as a translation from screen to tabletop it gets my nod.

Ignacy Trzewiczek’s hotly-anticipated followup to 2012’s Robinson Crusoe has certainly inspired divergent opinions from the fans. Many agreed that the theme was well-implemented and the visuals were strong. The companion app (necessary for play) definitely lacked some functionality and polish. The confusing rules also drew some ire, though anyone who struggled through the first editions of 51st State and Crusoe surely should not have been surprised. There were also some component issues (not enough cubes!) and some found the game too fiddly and alpha-prone. I predict a 2nd Edition which will iron out the rules and streamline the mechanics–tis ever the way with Portal Games.

Kurt Keckley managed to make World War One’s Western Front a gameable proposition full of bluff, counter-bluff, and push-your-luck. He also included a challenging solitaire mode that manages (with some accounting and fiddliness) to provide almost as much enjoyment. GMT added its usual spit-and-polish and, bob’s-your-uncle, an innovative and fresh design is born.

So few co-op games figure out how to avoid the “Pandemic Effect”, and here comes Magic Maze’s whimsical take on dungeon delving and…shopping. Players are trying to get their dungeon party to market and then home but each player is in charge of a direction of movement rather than a character. It’s got a campaign-style series of seventeen increasingly-difficult scenarios and it’s just plain hysterical fun.

The Root Marauders Expansion: Some Thoughts and A First Look