If you’ve been a long-time reader of this blog, you know of my love for the tense cooperative game Hanabi. It’s a game that limits the communication players have and forces them to act through trust and intuition. There have been a few games that work in a similar manner over the years, one of the newest to come out is Kreus.

In Kreus, you play a god, son to Uranus. He has grown tired of your peace loving ways, and imprisoned you in Tartarus. However, your mother Gaia takes pity on you and sets you free to flee to the other side of the galaxy. Now, it is a race against time. Working together with other players, you’ll communicate across the cosmos to create a new planet with your vision of peace and unity. You must complete your task before your father finds you, or you’ll be in chains forever. However, the planet by itself isn’t enough. It needs to be able to be balanced and able to sustain life for a total victory.

Kreus is a cooperative game, where players work together to build four levels of a planet. If done correctly, the planet will sustain life, and you’ll have proven to your father that war and conflict is not the only path to balance.

Kreus is played with a deck of Universe cards, consisting of Nature cards (which make up the different parts of the new world you’re trying to create), Element cards (used for completing Nature cards), and Aggression cards (the jerks of the card world).

Depending on the player count and your experience level, certain cards are removed from the game and then the deck is dealt out evenly to the players. From that point on, players are only allowed to ‘communicate’ through the parameters of the game. One player will get dealt the ‘Planet’ card. They are the first player and will start off the game. Again depending on the number of players, a certain amount of Energy tokens are available. The first player will take however many of the tokens they want (even all of them, although that would handicap the team’s chances for success), then each other player in turn will take some or all of the remaining stones, with the last player taking the leftovers. 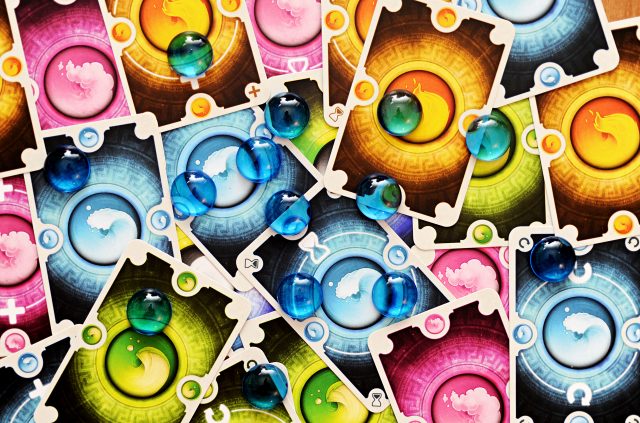 Energy tokens are extremely important in the game. They allow different forms of communication between the players. Each round of the game is played in different phases. The Divination phase give players a chance to plan which card they will select to play for the round. Players can’t consult with one another as to the card they’re going to play, but they can spend Energy tokens in this phase. One token, allows you to show one card to one other player. Two tokens allow you to exchange a card face down with another player. You won’t know what they’re giving you, until you see it. Finally, three tokens allow you to exchange a card in your hand with the discard pile.

Those actions may not sound too useful, but skilled players can really take advantage of them.

The Divination phase ends once players have spent whatever tokens they wanted to, and then secretly selected the cards they want to play that round. The Creation phase begins with the first player revealing their card, and if possible, playing it. Then each player in turn does the same.

Nature cards make up the different levels of the planet. Level one cards consist of the Comet and the Atmosphere. They can be played with no prerequisite, but cards on levels 2-4 require certain previous cards to be completed. The Nature cards all require certain Elements to complete them. For example the Comet card requires a Fire and an Earth Element card to complete it. Once the Comet has been completed, it is possible to play down the Rainbow and Mountain level two Nature cards, and so on.

Each card shows very clearly at the bottom which cards it frees up on the higher level, and at the top it shows which card or cards need to be completed before it can be played. Successfully playing a Nature card earns you back an Energy token, so getting those down on the table is critical. There are only 11 Nature cards in the game, with only one copy of each card. Being forced to discard one, means that particular path to victory no longer exists. One additional benefit to Nature cards, is that they can be used as a wild Element card. Played face down, they can fulfill the demands of any one Element on an incomplete Nature card.

Timing is everything, as the players reveal and play their cards in turn order, each card will either have a safe place to go, or will be uselessly discarded. This is where effectively taking advantage of the Energy tokens is so critical. If I can show a player later in turn order that I’m going to play a Nature card, they might be able to plan to put down a Element card that it requires to be completed. Or, you could trade a card with someone going earlier in turn order to compel them to complete a level two Nature card, allowing you to play down a level three Nature card. Kreus is the kind of game that will drive you insane with the permeations, as you try to optimize your turns.

Aggression cards must be played at some point in the game. Thunderbolts force players to discard an Element card from an uncompleted Nature card, however if none exist they cause no damage. The Hekatonkheires forces all cards after it to be discarded until a Nature card is played (nasty!). The Storm of Uranus forces all Element cards to be discarded from incomplete Nature cards, and if none are discarded when it’s played, you have to take it back into your hand (super nasty).

Even without Aggression cards, Kreus is a tough puzzle to solve. You need to work together, without really having the ability to plan. The goal is to get out the one and only level four card, The Planet, and complete it with all four Elements. That is a tough task to accomplish. You get a sliding scale of victory depending on how close you got.

Kreus is a quite enjoyable, if tense puzzle. I often want to try it again immediately, after completing a game. Aside from Hanabi, it also reminds me a bit of The Grizzled. That makes sense too, since it’s the second partnership between CMON and Sweet Games, which previously published the beautiful and challenging WWI cooperative card game.

Kreus will be hitting your FLGS on March 31st. Definitely give this unique cooperative puzzle game a try.

ROBORALLY or TRAGIC: the SMASHERING